This artichoke pizza recipe is layered with a creamy parmesan spinach sauce, mozzarella, pecorino and tender marinated artichoke hearts. The chewy pizza dough is blistered in a super hot oven for the artichoke pizza every time!

Think of your favorite spinach artichoke dip, spread on top of the best artisan pizza and topped with gooey melted cheese. No, you’re not in a dream. It’s creamy, it’s cheesy, it’s crunchy and chewy— it’s artichoke pizza!

The white sauce is flavored with garlic, Parmesan and the tiniest knob of cream cheese. Fresh baby spinach is packed into the sauce (more than you’d think possible, which, with the case of fresh spinach, tends to be almost enough). We sprinkle mozzarella on top with a small scattering of pecorino, which you don’t want to skip. It adds salty depth to the cheese layer. By itself, it’s almost like a spinach alfredo pizza.

Then we finish the pizza recipe with really good marinated artichokes. They should be good enough to eat from the jar and not rubbery or bland. Good artichokes are so important for good artichoke heart pizza, don’t overlook that here!

Then follow my guidelines on how to make homemade pizza— I’m biased, but I’d say it’s easily the best pizza dough recipe out there!

what you need for this artichoke pizza recipe:

how to make artichoke pizza:

how to put artichokes on pizza:

why this is the best artichoke pizza recipe:

Creamy spinach sauce: The sauce on this artichoke pizza is arguably the best part of the whole recipe. We reduce heavy cream with a garlic clove until really thick and fragrant, then we wilt in a ton of fresh baby spinach. It’ll feel like you’ve added way too much spinach, but trust the process and let it cook down. Then we stir in cream cheese and grated parmesan and let it all cool. It’s creamy and richly flavored, and I also love that it’s packed with fresh spinach.

The cheese: We use mozzarella for a milky, creamy, perfectly meltable main cheese. But then we also use a handful of grated pecorino romano. This aged sheep’s milk cheese is hard, salty, and full of flavor. A small touch adds so much flavor and dimension to the pizza!

what goes well with artichokes on pizza?

If you want to expand this pizza and add more fun toppings, here are some ideas to make this your own!

tips on making this artichoke pizza: 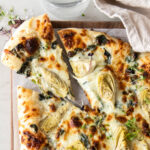 This artichoke pizza is spread with a creamy parmesan spinach sauce, then sprinkled with mozzarella, pecorino and marinated artichoke hearts.