×
You are here: Home / drinks / hot mulled cider with pear, ginger and whiskey

There’s nothing quite like a warm mug of mulled cider on a cold night– especially if it’s spiked with whiskey, like this recipe. And served with popcorn and HGTV. Sipping mulled cider in the fall is one of my favorite ways to enjoy the season and unwind in the evening. Plus, it makes the house smells so cozy.

This cider is incredibly easy to make– just toss the juice, spices, sugar and lemon juice in a pot and gently heat it up. Let it cook for at least 20 minutes to infuse the pear juice with the rich spices, then enjoy!

Do note, however, the longer this recipe slowly cooks on the stove, the more richly flavored it will be and the more delicious your house will smell! A slow cooker is a great way to keep the temperature really low for several hours, without worrying about the sugars burning.

I love the warm spices, spicy ginger and bright hit of lemon in this pear cider, and I hope you will too.

can you reheat this mulled cider recipe?

Yes! Mulled cider can easily be reheated in a saucepan over low heat, or even in the microwave on low power.

The only downside to reheating this mulled cider recipe is you may cook off some of the alcohol. In this case, keep the lid on the saucepan so most of the ethanol vapors can collect and re-condense in the pot. And only cook it long enough to reheat.

Alternatively, when you’re making the mulled cider you can just add whiskey to your glass, rather than the whole pot. That way you can 1) control the strength to your liking and 2) reheat the cider without losing the alcohol!

how long can you keep mulled cider?

Mulled cider will keep for up to 3 days, covered and in the refrigerator. I would recommend straining off the spices before you store it. This prevents it from getting too strong (the cinnamon sticks can add an unpleasant tannin if steeped for too long).

You can also freeze the strained mulled cider for up to 3 months. To thaw, put the frozen cider in the refrigerator the night before, then reheat gently on the stovetop when ready to enjoy. 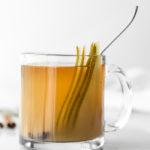 This is a rich, warmly spiced recipe for hot mulled pear cider. It’s filled with cinnamon, cloves, bay leaves and spicy ginger and topped off with a boozy hit of whiskey to keep you extra warm!

one 2-inch piece of ginger, sliced into coins

2 cinnamon sticks, broken in half

Mulled cider recipe can be cooled and stored in the refrigerator for up to 4 days. Gently rewarm over low heat. It’s best if you stir in the rum after rewarming it, to prevent the alcohol from evaporating.