These roasted, glazed parsnips are going to be your family’s new favorite vegetable. They have crispy caramelized edges and fluffy insides. The maple ginger glaze takes them over the top.

They’re sweet, spicy, tangy and so buttery. It’s the only non-dairy food our one year old is eating!

I especially love the way the warm ginger notes and cozy maple syrup round out the earthy spice of the roasted parsnips.

And as usual, I love to add a bit of spice to my recipes and tossed in some red pepper flakes for extra flare. Feel free to leave them out, or to add more to taste! Just don’t skip the flaky salt part. It adds a delicate crunch and really makes the flavors pop.

There’s no better way to enjoy a roasted parsnip than doused in this buttery, maple ginger glaze.

Parsnips are such an underrated vegetable. They look like large white carrots but are much more complex. They have a distinctive earthy, spicy flavor with a starchy texture and a sweetness like a carrot.

Some say the flavor is reminiscent of anise, others say they’re sweet and nutty, while others adamantly claim the parsnip flavor is most like nutmeg. Clearly, they have a lot going on and you’ll just have to try them yourself.

As parsnips get bigger, they develop a fibrous woody core that needs to be removed. They can also get bitter and are best consumed when small, sweet and tender.

how to cook parsnips

Parsnips are typically cooked in stews, alongside potatoes and carrots. But my absolute favorite way to cook parsnips is roasted in the oven at a high temperature.

The sugars caramelize, the edges crisp up and the centers become fluffy and tender. Not only does it produce the most delicious results– it’s also the most hands off method!

You can steam or boil parsnips as well, but they won’t develop the best flavor (or the sweet caramelized edges). This roasted parsnip recipe is ideal.

do you peel parsnips before cooking?

While you don’t have to peel parsnips, I always do. For one, they look cleaner and more appealing. They also taste better.

The skin can be tough, bitter and earthy, especially if the parsnips are large. For very small young parsnips, you can scrub them really well and get away with leaving them unpeeled.

But peeling only takes a few minutes, so why not?

how to make roasted, glazed parsnips:

kale and brussels sprout salad with pecorino and almonds 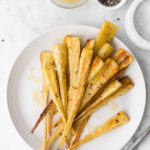 These roasted parsnips have crispy caramelized edges and fluffy insides. They’re tossed in a buttery maple ginger glaze and for a sweet and spicy flavor. 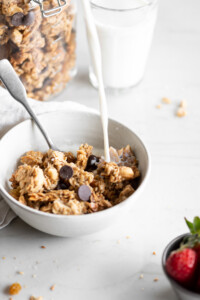 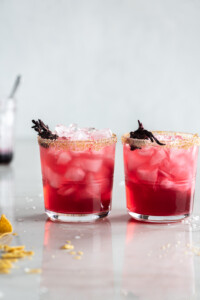 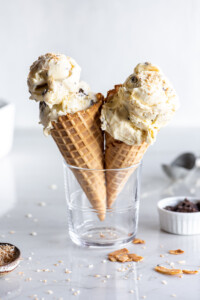