This isn’t like any cinnamon French toast you’ve had before. Skip the thin, soggy, eggy slices of French toast— no one has time for those. This extra thick brioche French toast is the answer to all of your breakfast prayers. I soak the rich brioche in a vanilla-bean custard for a souffléd texture. Then I coat it in a thick layer of cinnamon and sugar and fry it in butter to create the most deliciously caramelized crust.

The smell of butter, cinnamon, vanilla and caramelizing sugar is just the beginning. When you cut into the cinnamon French toast, you’ll love the crunchy top and creamy center. I prefer to skip the maple syrup here, too— the cinnamon-sugar crust and lightly sweetened custard is enough. You will want to drag this cinnamon French toast through a dollop of whipped cream, though. Make sure to whip it fresh— this thick French toast deserves it!

how do you make cinnamon french toast from scratch?

what can I use instead of brioche?

Brioche is a buttery egg bread that is soft and rich— it makes a tender, flavorful base for this cinnamon French toast. But if you can’t find an unsliced loaf, don’t worry! You have a few options.

Option 2: Make your own brioche! A 9-inch x 5-inch loaf pan will give you six perfect 1 1/2-inch thick slices. If you have a stand mixer, brioche is shockingly easy to make. But it’s shockingly messy and traumatic if you try to make it by hand. I don’t recommend it.

Option 3: French bread. An unsliced loaf of French bread will give you the flexibility to get the extra thick slices. The French toast just won’t be quite as decadent.

can you make this cinnamon brioche french toast ahead of time?

While this cinnamon french toast is fairly quick to whip up on it’s own, there are a few steps you can take to streamline the process and make it even faster. 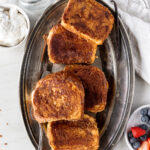 Soak thick slices of brioche in a rich vanilla bean custard, then coat them in cinnamon-sugar and fry for a crunchy crust. This cinnamon French toast has a caramelized surface and souffle-like center.