This cinnamon swirl yeast bread is a caramelized, gooey roll of cinnamon and sugar wrapped inside a tender, fluffy crumb. It tastes like a cinnamon roll, except there’s no guilt when you eat 3 slices in a row— because come on. It’s just bread. It can hardly be too decadent for thirds.

The recipe hails from Transylvania, where the co- owners of Zingerman’s traveled for culinary research. They sell it in their Ann Arbor bakery a few times a year, and thankfully, they published the recipe in their new cookbook for the rest of the world to enjoy.

some tips on this cinnamon swirl yeast bread:

I also ran a sharp knife around the edges of the pan when it came out of the oven and then removed the bread sooner than the 20 minutes the recipe stated— before the sugar had a chance to harden and glue the bread to the pan. At least, that’s what I told myself as I ignored the rest of the recipe, pulled the bread out of the pan, cut into the warm, cinnamon scented dough and savored the first sticky spiral.

Good for you if you can wait for this cinnamon swirl bread to cool. 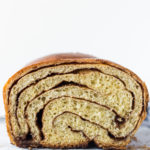 This yeast bread is a caramelized, gooey swirl of cinnamon and sugar wrapped inside a tender, fluffy crumb.