I am so excited to share this chocolate cherry bread with you. The loaf is scattered with dried tart cherries and toasty chunks of caramelized white chocolate.

The artisan style yeast bread has a crunchy crust and is full of flavor, thanks to a Dutch oven and the fantastic bread making techniques of Ken Forkish. The recipe may looking daunting, but hang in there. Once you figure out the process (which is pretty repetitive), you’ll be able to make the most amazing artisan white chocolate bread. It’s chewy, crusty, sweet, tart and so satisfying.

If you’ve never had caramelized white chocolate, now’s the time to change that! It’s a toasty, nutty, toffee-flavored transformation of white chocolate that you won’t be able to get enough of.

Your friends and family are going to be blown away by this combination of flavors and textures. That is, if the bread ever makes it to them.

what is caramelized white chocolate?

Caramelized white chocolate is made by slowly roasting white chocolate. The milk solids (proteins and sugars) undergo a combination of caramelization and maillard reactions which produce a golden color and deliciously toasty flavors.

Think notes of caramel, butterscotch, toffee, biscuit, dulce de leche and roasted nuts. When the white chocolate cools, the texture remains creamy, smooth and luscious but it has a much more complex flavor.

David Lebovitz has a great tutorial on how to make your own caramelized white chocolate that you can see here!

And if you don’t want to make it, you’re in luck! Valhrona developed a caramelized white chocolate in 2012 called Dulcey. It’s delicious, toasty and much more consistent than anything you make at home.

what is a biga?

A biga is a type of preferment. It’s a portion of a yeast dough that is mixed ahead of time. Flour, water and a small amount of yeast are combined and allowed to ferment for up to 12 hours before the final dough is mixed.

In general, a biga tends to be a stiffer dough than a poolish (another type of preferment), which is usually equal parts water and flour.

what is the purpose of a preferment?

Flavor. Simple as that. When a portion of the dough is mixed ahead of time, enzymes are activated that break down starches into sugars. This has a lot of effects.

For one, those simple sugars taste better than starch.

And two, those sugars are now available for yeast and bacteria to ferment them. That fermentation produces flavors and acidity (in addition to alcohols and carbon dioxide). This bubbly and flavorful preferment gets mixed into the final dough to add complexity.

And as an added benefit, the extra acidity from the preferment also helps the bread last longer.

here’s a timeline for the white chocolate artisan bread:

For more details on the process for this white chocolate cherry bread, check out this post for chocolate chunk artisan bread. The process is almost identical.

Even better, check out the book Flour, Water, Salt, Yeast by Ken Forkish to really understand these techniques and why they’re so important! 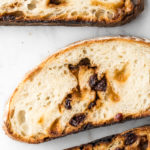 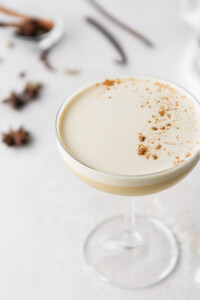 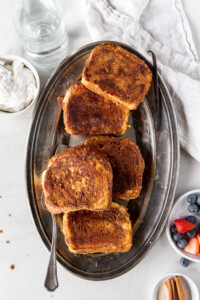 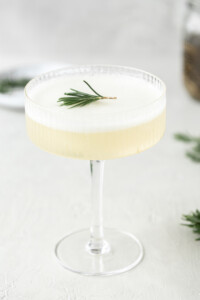