This swiss chard tart with leeks and pecorino is rich and savory. The crust is filled with a silky custard, sweet buttery leeks and a ton of swiss chard.

One of the biggest challenges I have with seasonal cooking is the transition from one season to the next. The weather begins to change, butternut squash loses its thrill and the anticipation for new produce doubles down. For me, waiting for winter to end and spring to begin is the hardest seasonal transition.

Pea shoots, fiddlehead ferns, morels, green garlic– these relatively rare vegetables symbolize spring as much as chirping birds and sprouting tulips. I’ve realized, though, that it’s not entirely fair to give these few show stoppers all of the attention.

Fresh spring flavors can be summoned with a whole host of fruits and vegetables that are more every day and readily available, even if you’re still shoveling out your driveway. Frozen artichoke hearts, peas, leeks, fresh herbs, citrus fruit, strawberries, leafy greens — while these might not always be farm fresh or the best of the season, cooking with them can tide you over during the slow crawl of February.

And this swiss chard tart with leeks and pecorino does just that. It was born out of the frustration of waiting for rhubarb and the quintessential produce of spring, yet it’s fresh, aromatic, and tastes like a crisp day in April. This is a savory tart that begs to be served at an Easter brunch with a crisp glass of Pouilly Fumé.

Swiss chard is a mild tasting leafy green vegetable. It is much less vegetal and bitter than kale, and the leaves are sturdier than spinach. While sensitive tasters do detect bitterness in the leaves, it’s not considered a bitter green. Young chard leaves can be eaten raw in salads and slaws, but I prefer it cooked.

Swiss chard is the white variety of chard and there are many other colors available (yellow, red, purple). The flavor and texture of rainbow chard is almost identical to white Swiss chard, so any variety will work in this chard tart!

can you eat the stems of swiss chard?

Yes! Unlike kale stems which are tough and fibrous, Swiss chard stems will soften when cooked and are perfectly edible. If you prefer to use the stems, simply chop them up and saute them for a few extra minutes before adding the leaves.

what does chard go well with?

Because chard is so mild tasting, it goes well with a range of flavors and dishes. I love to use Swiss chard with flavors like garlic, shallots, leeks, citrus, mushrooms, butter, chicken stock and vinegar.

It’s great to use in soups and stews, thanks to the sturdy leaves. It goes really well with salty aged cheese, like Parmesan, Pecorino, Gruyère and Comté. Chard is a wonderful addition to pasta, polenta or potato gratins.

Bottom line: use swiss chard wherever you might use a leafy green, but cook it a little less than kale or a little longer than spinach.

Swiss chard is a versatile, mellow tasting leafy green that can go well with a range of herbs. Here are a few that is goes especially well with!

how to make the savory tart shell:

how to make the swiss chard tart:

greens and giant beans on toast 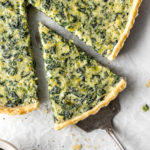 This swiss chard tart with leeks and pecorino is rich and savory. The crust is filled with a silky custard, sweet buttery leeks and a ton of swiss chard. 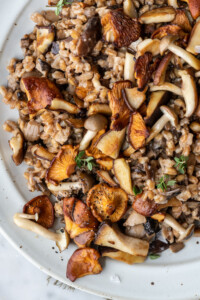