×
You are here: Home / breakfast / chorizo hash with poblanos and charred jalapeño hollandaise

Chorizo hash is the ultimate breakfast. It’s loaded with spicy crumbles of chorizo, sweet onions, poblano peppers, and crispy cubes of Yukon Gold potatoes. Top with a crispy fried egg, avocado, and charred jalapeño hollandaise, and you’ve got yourself the brunch of dreams.

Potato hash started as a simple way to use up leftovers, like cooked potatoes, steak and lingering vegetables. Chop it all up, toss it in a frying pan, and voila– a hearty weekend breakfast is born. While there will always be a place for this sort of impromptu and resourceful cooking, there are a lot of ways to improve the standard breakfast hash and make it perfectly cooked, crispy, and flavorful.

what makes this chorizo breakfast hash so great?

what is chorizo, anyways?

Chorizo is ground pork sausage that is seasoned primarily with chili peppers and paprika. There are a ton of different styles, spice ranges, and even meat blends within the chorizo category. In general, though, there are two main styles: fresh and raw (Mexican chorizo) or cured and dried (Spanish).

In this chorizo hash recipe, we use fresh chorizo and break it up into crispy crumbles as it cooks. If all you can find is cured chorizo, don’t worry. Slice it into half-moons or small cubes and saute in olive oil to crisp up the edges. Continue on with the recipe, and enjoy an extra smoky chorizo potato hash!

what potatoes should I use for breakfast hash?

Any potatoes will work just fine in breakfast hash. The choice comes down to personal preference. I prefer to use waxy potatoes (like Yukon Gold) because I love their creamy smooth texture and the way they hold their shape, even after a lot of frying, stirring and flipping. Starchy potatoes (like Russets) will get extra crispy, though they might break down a bit.

how do you make chorizo hash from scratch?

how to reheat chorizo hash

The best way to reheat this chorizo breakfast hash is in a skillet on the stove. This helps re-crisp the potatoes while everything gets heated through. Add a small amount of olive oil to the skillet and cook over medium-high heat, stirring occasionally, until hot and crispy.

can I make the chorizo potato hash ahead of time?

You can make this chorizo hash up to 2 days in advance.

You can either make the full recipe and re-heat it in a skillet as described above, or you can prep individual parts ahead to save time in the morning.

here are some ways you could prep the chorizo hash the day before: 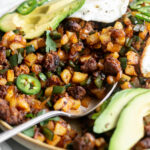 Chorizo potato hash is the ultimate breakfast. It’s loaded with spicy crumbles of chorizo, sweet onions, poblano peppers, and crispy cubes of yukon gold potatoes. Top with a runny fried egg, a ton of avocado, and of course, the charred jalapeño hollandaise.